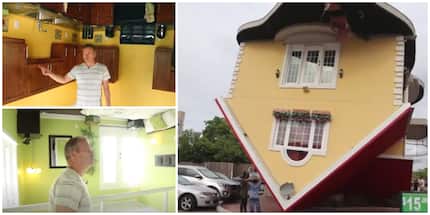 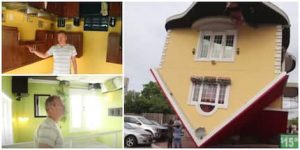 A talented man named Marek Cyran built an upside-down house in Niagara Falls, United States to the surprise of many people Marek had first proposed the house style after sighting a similar work of architecture when he visited Poland but he was mocked Today, his upside-down house is not only the toast of the community but now attracts tourists all around in their numbers

In an outrageous stray away from the norm that has existed for centuries, a man took it upon himself to erect a house that would be upside down. Marek Cyran got the idea for an upside-down house after seeing one in Poland while on vacation and proposed it to people in his community.

Marek’s idea was mocked by the people but he would not be discouraged. In the year 2012, Marek successfully built an upside-down house in Niagara Falls, USA.

Everything in the house is upturned A YouTube Video by Kool Buildings showed the interior of the building that would have been before now considered a figment of one’s imagination. The one-storey building has its roof lapping on the floor and the other end facing the sky. On the inside, the kitchen, dining table, bedroom and other areas in a normally positioned apartment are erected in upturned positions. Even a decorative plant can be seen upside down. It is home to tourists Marek’s daring work of architecture has somewhat facelifted the community as it has become a tourist destination. Niagara Falls Hotels reports that the house admits tourists for a fee tagged admission fee. Due to its upside-down nature, one could get disoriented as it might give a weird feeling when inside it.

The US man identified as Bruce Campbell acquired a 1969 Boeing aeroplane in the year 1999 at a price of $100, 000 (N41 million). The old man who owns the aeroplane house believes all old planes should be made into homes to prevent them from being wasted. In his words: “Shedding a beautiful and scintillating jetliner is a tragedy in waste, and a profound waste of human imagination.”