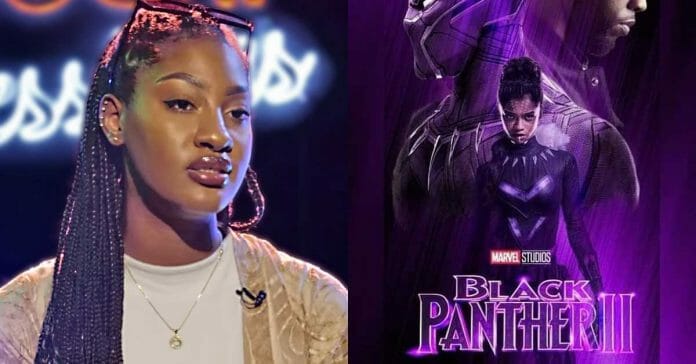 Multiple award-winning Songbird,
Tems has been featured on the soundtrack for Black Panther 2.

The official trailer for Marvel Studios’ “Black Panther: Wakanda Forever” was released on Sunday, seems the super star give a sonorous rendition of Bob Marley’s “No woman, no cry.”

Kendrick Lamar’s “Alright” was also featured on the soundtrack.

In the trailer, the song plays until halfway through where the part “Everything’s gonna be alright”
plays with Kendrick Lamar’s “We gon be alright”, before the later continues till the end.

Tem’s manager, Muyiwa Awoniyi sharing the trailer via his Twitter handle said:
_“Grateful to the amazing people at @MarvelStudios. BIG LOVE to the legend Ryan Coogler._

_“It’s @temsbaby on the official Black Panther 2 trailer.
My father in heaven.
Thank you once again.
Rest in peace @chadwickboseman.”_