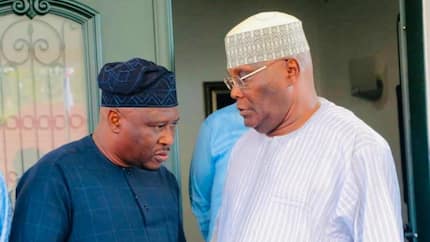 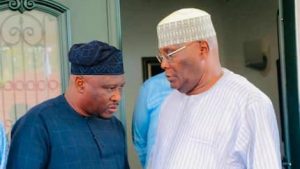 Ahmadu Fintiri, the governor of Adamawa state, has said he will strongly support former vice president Atiku Abubakar if he again emerges as the presidential candidate of the Peoples Democratic Party (PDP) in 2023. Fintiri who is the chairman of the PDP national convention committee said this on Tuesday, October 26.

The governor of Adamawa state said Atiku has all it takes to rule Nigeria, reiterating that he will work towards his emergence as Nigeria’s president if he gets the PDP’s presidential ticket.

Governor Fintiri noted that the PDP has learned its lesson, adding that the party is ready to take over power from the ruling All Progressives Congress (APC) in 2023.

He said when the PDP is voted back into power at the federal level, the party will take the experience of its 16 years rule and learn from APC’s alleged mistakes to deliver on good governance which Nigerians yearn for.

Governor Fintiri also boasted that some prominent members of the APC will defect to the PDP ahead of the next general elections. Former Senate president Saraki speaks on defection, 2023 presidency

Meanwhile, former Senate president Bukola Saraki has reacted to speculations that he may dump the PDP for the APC should he fail to get the party’s presidential ticket in 2023. Saraki while ruling out plans to abandon the opposition party during an interview programme on Arise News TV on Tuesday morning, October 26, said he is a team player.

According to him, it would be unfair to think he would join APC, adding that when he ran for the presidency and didn’t get the ticket in 2019, he offered himself to be the DG of Atiku Abubakar’s campaign.