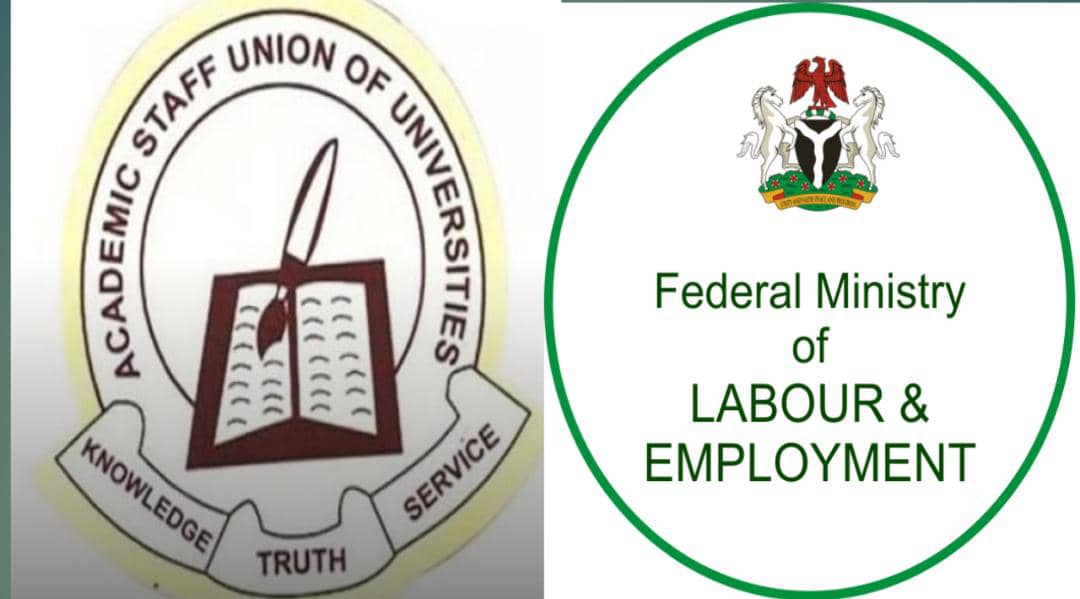 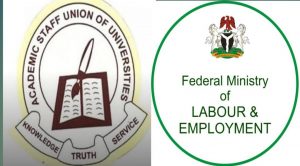 ASUU STRIKE: “The ministry will not allow itself to be bullied by any Union into forcing any payment platform on the government”- FEDERAL MINISTRY OF LABOR AND EMPLOYMENT

The Federal Government of Nigeria, through the Ministry of Labor and employment, on Sunday gave insights
into why no unions in the country’s university education system were invited to last Thursday’s meeting.

It was stated by the federal government, that the meeting was held to assess
the progress made so far on addressing the few outstanding demands of ASUU such as the contentious payment platform
and the renegotiation of their terms of service.

In a statement given by Olajide Oshundun, head of Press and Public Relations, Federal Ministry of Labor and
Employment, it was noted that the belligerent and several bottomless accusations by the Academic Staff Union of Universities, against the
government and particularly, the Minister of Labor and Employment, Senator Chris Ngige, that said all insinuations that the Ministry of
Labor does not sympathise with the students, unions and parents, of which the Minister is one, are all misconceptions and should
be disabused.

According to the statement, the ministry implore ASUU to know that they are arbitrators and therefore are
not given the power to manufacture agreements. It also noted that they are however, not constrained from
listening to the government’s side and nudging them to do their own bit as quickly as possible.

The Ministry went further to fault the comments made by ASUU President, Professor Emmanuel Osodeke,
during an interview on Channels Television that his union was not invited by the Federal Government to attend the meeting held last
Thursday, June 23, 2022 at the Presidential Villa in Abuja.

Anterior to Osodeke’s interview, the statement revealed that all kinds of write-ups accusing the
Minister of Labour and Employment, of being the headache of the university lecturers, which were authored by members of ASUU, had been
trending on social media.

Among other points, the statement read “We will start by making some clarifications on the
government’s side. The meeting held last Thursday, June 23, 2022, was geared towards the resolution
of the multiple strike actions undertaken by the Academic Staff Union of Universities (ASUU) and other university-based unions,
the Senior Staff Association of Nigerian Universities (SSANU), Non-Academic Staff Union of Universities (NASU)
and National Association of Academic Technologists (NAAT)”.

The meeting in question was called to assess the progress made so far in addressing the few
outstanding demands of the striking university workers, such as the contentious payment
platform and the renegotiation of their conditions of service.
These two committees were empanelled by the Minister and the Chief of Staff to the President at the
last tripartite plus meetings of the unions and the government side.

“For the avoidance of doubt, none of the unions was invited to last Thursday’s meeting and the
Minister of Labour and Employment, Senator Dr Chris Ngige, while briefing State House correspondents
after the Federal Executive Council (FEC) meeting last Wednesday, June 22, 2022, clarified that the
meeting would hold the next day (Thursday, June 23,2022), for the government side alone.

“As expected, the meeting was held and all the stakeholders reported on the
various assignments given to them and accordingly, received further briefing and directives from the
President in order to accelerate discussions with ASUU.
It is hoped that before Wednesday this week, all the various sub-committees will turn in their reports,
to enable Mr President to be briefed fully and for decisions to be
taken on the contentious payment platform and the renegotiation of the conditions of service,
especially the issue of wage increase.

“It is after receiving briefings from the government side that the
Ministry of Labor will bring in all the stakeholders, including the unions, to a conference
table in order to look at the agreement before signing or endorsing it.

“All insinuations that the Ministry of Labor does not sympathize with the students, unions
and parents, of which the Minister is one, should be disabused.
The Minister had received a commendation from the ASUU leadership for his role in the resolution of
the impasse in the education sector on several occasions.
Acting with the Chief of Staff to the President, he empaneled the two committees to work
diligently and according to the law, towards the obstinacy of the teething issues of payment platform and renegotiation of the conditions of service.
The claims made here are confirmed, being out there in the public domain.

Nonetheless, the ministry will not be coerced into forcing any payment
platform on the government, which took a decision to adopt the IPPIS
a long time ago in 2017 by any Union”.

TAGS:Assu Strikeasuu strike updateASUU STRIKE: “The ministry will not allow itself to be bullied by any Union into forcing any payment platform on the government”- FEDERAL MINISTRY OF LABOR AND EMPLOYMENTFg and assu
Up Next