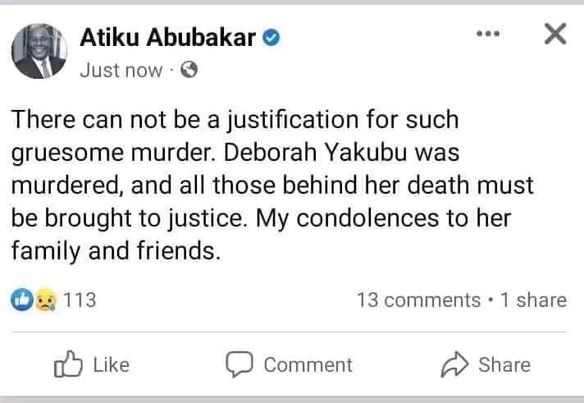 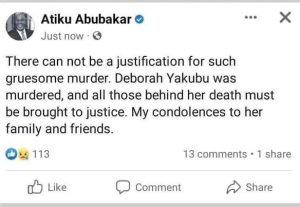 Atiku Abubakar made this post condemning the gruesome murder/burning of Miss Deborah Yakubu by some Muslim fanatic for telling her fellow students to stop posting religious things on their class WhatsApp group hence it was meant for communication/learning.
He’s northern brothers started hitting him in the comment section on how he has lost a million votes from them etc, Our former VP knowing the power of votes from that region above human life, he quickly took down the post.
Atiku Abubakar has indeed lost many Nigerians on this day and it will remain recorded so as well.
If you never knew the problem of this country before now, you now know better and we all can see how most northern elites are finding it difficult to condemn this act publicly and even the Governor of Sokoto state?
This Union Is Not & Has Never Been Worth It
SOURCE: UKAN KURUGH
SEE POST BELOW