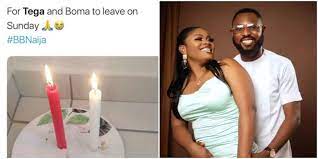 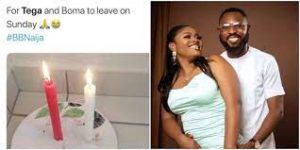 BBNaija Shine Ya Eye star, Tega’s husband, Ajeboh, has taken to social media to react to the incessant trolling his wife has received Ajeboh, who appears to be handling Tega’s page shared a post a troll made where they lit up a red candle, hoping for her to get evicted from the show The father-of-one said that lighting candles was not enough to send his wife home and he will keep fighting for her

Fans of the BBNaija Shine Ya Eye show seem to have gotten to Tega’s husband, Ajeboh, who recently took to social media to react to trolls trying to pull down his wife. In a recent post on Tega’s page, Ajeboh who appears to be the handler shared another post made by a troll where they lit a red candle in prayer for the BBNaija star to get evicted.

In reaction to the discouraging post, Ajeboh noted that lighting candles was not enough to send his wife packing.

Speaking further, the young man said that despite the BBNaija show being a game, people seemed bent on destroying Tega.

According to him, blogs have posted lies about her that he has been unable to defend. He added that anything Tega says gets twisted.

He however implored fans to vote for his woman and give her a chance. In his words:

“Good morning Tegans! We will keep fighting for Tega. If you like, carry her picture for sacrifice because these candles won’t be enough but we will keep fighting for her. “It’s just a game, why are people bent on destroying Tega? The lies on the blogs, we can’t even defend! She says one thing and they change it to something else. Now it’s red candle? Africa please give Tega a chance too.”

Her husband’s defence is coming shortly after Legit.ng reported that Tega shared her thoughts on what she would do if her husband happened to call of their marriage because of her involvement in the BBNaija show. In a video that made rounds on social media, the mum of one revealed to Boma and Liquorose, the question she was asked presumably during her audition. The young woman said that she was asked what she would do if she gets out of the house and her husband who has been a supporter says he is no longer interested in the marriage. Tega said she replied that there was no problem seeing as she would be with the fame and everything that comes with it.