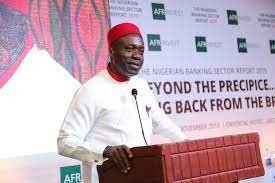 – Some yet-to-be identified gunmen have staged a bloody attack in Isuofia, in Aguata local government area of Anambra state – The gunmen reportedly attacked ex-CBN governor Soludo and killed three policemen guarding him in the process – Emeka Ezenwanne, the state’s commissioner for public utilities, was reportedly taken away by the gunmen.

Unknown gunmen have attacked the former governor of the Central Bank of Nigeria (CBN), Prof. Charles Soludo, killing three policemen guarding him, Daily Sun reported. The newspaper stated that the incident took place in Soludo’s community, Isuofia, in Aguata local government area of Anambra state during a meeting with the youths of the community.

Eyewitnesses at the event were cited as saying that Soludo was safe but his whereabouts were unknown.

Also reporting the incident, Channels TV stated that the Anambra state commissioner of police, Sunday Kuryas, confirmed the bloody attack on Professor Soludo who is a frontline aspirant in the forthcoming November 6th governorship election in the state.

gathers that the police boss explained that the details are still sketchy but reports from his men in the area said some gunmen stormed Isuofia Townhall where Professor Soludo was having a meeting with the youths of the community. He confirmed that three policemen were gunned down while the state’s commissioner for public utilities, Emeka Ezenwanne, was taken away by the gunmen. The police commissioner also assured residents of the state that every detail about the incident will be made public as they unfold.

Meanwhile, as aspirants sweat it out for the Peoples Democratic Party (PDP) governorship ticket in the party’s primary election in Anambra state, Peter Obi has stated that he has not anointed any aspirant. The 2019 vice-presidential candidate of the PDP made the disclosure on Wednesday, March 31, at an interactive meeting with state officials, local government officers, wards chairmen and secretaries. According to Obi, every aspirant must go for primary and whoever emerges winner shall be supported for the election.