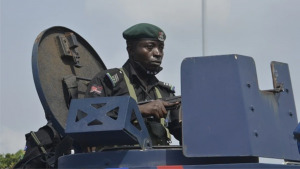 The Punch reported that police operatives took over Mapo Hall, Ibadan, the venue of the rally, in the early hours of Saturday, April 17.

Akintoye, an 86-year-old Emeritus Professor of History, was scheduled to lead the rally but the venue has been surrounded by armed policemen and armour personnel carrier.

It was learnt that there are more than 20 police vehicles including patrol vans in Mapo Area. The organisers have also not been seen at the venue although some members were said to have come earlier and left because of the situation there. The Punch stated that the organisers were allegedly strategising for the next line of action. The development has also been reported by Sahara Reporters. In another report, the coalition of over 174 Yoruba groups in the diaspora, under the auspices of Yoruba One Voice (YOV) met at an International Webinar Conference held on Saturday, March, 27. The meeting had in attendance over 1,000 prominent Yoruba sons and daughters. Read more:

In a statement made available to the YOV said it is committed to the actualisation of the Oodua Republic.

Meanwhile, the presidency has reacted to secession agitators in the country, saying nobody can bring down the government of President Muhammadu Buhari. The Senior Special Assistant to the President on Media and Publicity, Garba Shehu, stated this during an interview on Channels Television on Friday, March 26.

The presidential spokesman described the secession agitators as “charlatans” sponsored to bully the president thinking he will cower or panic.