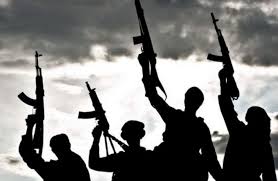 – Another day, another attack on a police facility in the southeast region of sßsßss by unidentified armed men

The Punch is reporting that a Divisional Police Station in Adani, in Uzo-Uwani local government area of Enugu state has been attacked on Wednesday, April 21 by unknown gunmen.

According to the report, three policemen on duty were killed, while several others were injured during the attack.

It was learned that the security infrastructure in the station were razed.

The state police command confirmed the attack, through its spokesman, Daniel Ndukwe who said more details would be made available later.

The attack on the police station started about 2:30 am and lasted till about 3:30 am this morning.

The attack has been generating reactions by Nigerians on social media.

“This is how Boko haram started in the northeast, first, they will attack police stations and other security posts, then they will graduate to attacking civilians and place of worship. Nobody in his or her right senses should cheer this news, the end is always one outcome, the innocent citizens will suffer.”

“We need peace more! The cops too have a family that depends on them for survival. Let’s join hands and kIcks against banditry irrespective of tribe, religion.”

“After destroying the security system in the east, when the real attack on the people starts, there will be no security for the people. Common sense.”

“This attack on police facilities in the southeast is becoming too many. When will Buhari wake up and do the needful by declaring a state of emergency in this region and deal with these bastards ruthlessly?”

Recall that armed men killed three police operatives in Abakaliki, the Ebonyi state capital at about 7:30 pm on Wednesday, April 14 along Nwezenyi road.

The officers who sustained bullet wounds during the attack were later confirmed dead by doctors at the Alex Ekwueme Federer University Teaching Hospital Abakaliki.

Meanwhile, Governor Dave Umahi of Ebonyi has stated that the recent attacks in the southeast were the handiwork of people outside the region.

Umahi who is also the chairman of the southeast governors’ forum, said those planning the attacks want to incite Igbos into war.