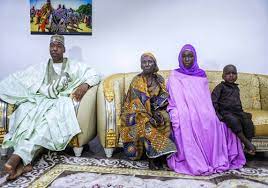 It was all joy and excitement at the  Borno State Government House,Maiduguri, yesterday when Ruth Ngladar Pogu, one of the over 200 Chibok school girls abducted seven years ago by Boko Haram reunited with her mother.

The re-union was facilitated by Governor Babagana Zulum who had dispatched officials to fetch Ruth’s mother from Chibok after the young lady’s re-emergence from captivity over a week ago.

Sharing in the joy was Ruth’s son,one of the two she bore for the Boko Haram commander she had been married off to while in captivity.

Ruth and her husband surrendered to soldiers on July 28 via the Federal Government’s Operation Safe Corridor in Bama, Borno State.

Zulum,speaking at the brief ceremony ,expressed delight that Ruth was back home safe and sound after seven years.

Zulum said the government would arrange  a rehabilitation and reintegration programme  for Ruth that will focus on her health, psychosocial wellbeing and her chosen path to a productive future, all of which will be determined by her.

He  said reuniting with Ruth was a boost to keeping the hopes of parents, other family members and the Borno State alive.He hoped that others still in captivity would return in good health.

He said his administration believed a non kinetic approach was key to the rescue of abductees and ending the Boko Haram insurgency.

Ruth Ngladar Pogu, now a Muslim, covered her head with  a purple hijab.

The Chairman of the Chibok Parents Association Yakubu Nkeki confirmed that she was one of the missing students.

He said, the people of Chibok appreciated the efforts of security establishments and the concern and support regularly shown by Governor Zulum on the plight of parents whose daughters are still missing.

The mother said she was grateful to God and the government for making it possible for her return.

Ruth’s children are aged about one and three years. The youngest is a girl.