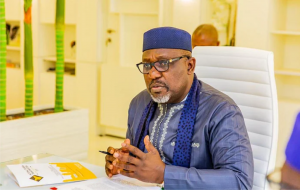 – Senator Rochas Okorocha is being questioned by the anti-graft agency, EFCC

– The former governor has been accused of alleged corruption

– However, the lawmaker has consistently denied the allegations against him

The Economic and Financial Crimes Commission (EFCC) has reportedly arrested a former governor of Imo state, Senator Rochas Okorocha. According to Premi

um Times, the senator was arrested about 4pm on Tuesday, April 13, at his Unity House private office in Abuja.

The publication learned that the politician was arrested after a five-hour standoff with EFCC operatives who trailed him to the location.

Okorocha had reportedly declined to honour several invitations from the agency prompting the commission to send its detectives after him. The said arrest of the politicians is reportedly connected to the alleged monumental graft which allegedly took place during his eight-year tenure as governor.

Wilson Uwujaren, the spokesperson of the EFCC confirmed the arrest to Vanguard newspaper. He said Okorocha was in the custody of the commission. Read more:

”Okorocha has been arrested by our men.

Meanwhile, the staff have been urged by their boss, Abdulrasheed Bawa, to be hardworking and devoted to work.

Channels TV reported that Bawa said Nigerians are looking up to them for success in the fight against corruption.

He gave the advice on Thursday, April 8, when he visited the Ibadan zonal office of the commission. He said the eagle is now in the hands of the EFCC, adding that the mission and vision of the commission remain the same. In another report, Abdulrasheed Bawa, says he will resign from office if he’s asked to do anything against the law.

In a statement posted on Facebook on Saturday, March 27, the anti-graft agency said Bawa stated this on Friday, March 27, when he featured on One-on-One, a programme on Nigerian Television Authority (NTA). The EFCC boss said Nigerians need to stop “worshipping people that have money”, and start questioning the sources of their wealth.