The photos of female police guards in uniform ensuring security in the Saudi Grand Mosque have generated massive reactions on social media.

After the country’s ministry of interior released photos, the snaps were reshared by different accounts that said the development is a great one. 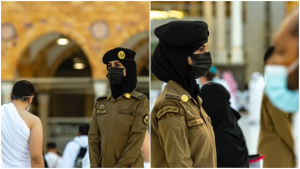 In the snaps, the female guards stood smart with confidence as they wore black facemasks that match the colour of their hijabs.

The same media gathered that in February 2021, the Saudi Ministry of Defence called on both women and men to take up various vacancies in the military.

According to Alarabiya, it is Crown Prince Mohammed bin Salman’s 2030 vision to advance the place of women in the Saudi community. One of the female officers who spoke to the media said that among the things they do in the mosque is to ensure that all COVID-19 measures are duly followed by everyone. It should be noted that earlier in 2021, the military law was amended to allow women to join the country’s armed forces.