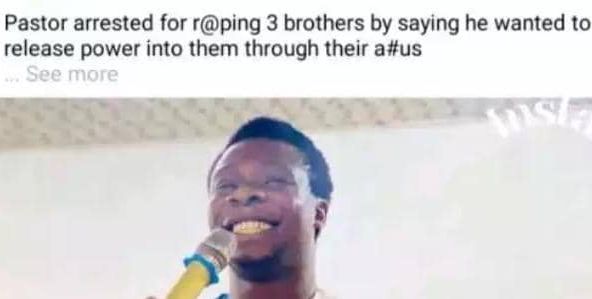 The pastor of chapel of Revelation ministry, Elijah Emenendu has been
arrested by the Lagos police for sleeping (raping) with his siblings who are his church members.

The were raped by the suspect which ministry is located at
Ajeromi region of Ajegunle multiple times until one of them mustered the courage to spread and report
what had happened.

There was a report that He said ” God.
Wanted him to stop YAHOO YAHOO then he ended sleeping with his older brother .

The S*X with him took place four times a week, twice a day.

It was perform with the use of needle to puncture Emenendu scrotum and navel.

However, until one of the siblings gather courage to speak out
about what was happening…

TAGS:GAY PASTOR WAS CAUGHT IN THE ACT WITH THREE CHURCH BOY'S
Up Next