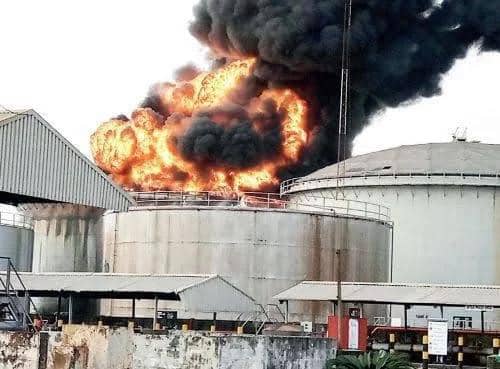 Not less than five individuals have
drowned while trying to flee from several explosions
that erupted at a tank farm run by a company called “Matrix Energy”,
located in ifiekporo community, Warri South Local Government Area,
Delta State.

Sources say, that the physical
conditions of about eight persons currently at undisclosed
hospitals are tagged as “critical”.

It was gathered that panic broke out in the community,
which is home to many other tank farms, as the Matrix tank farm went
ablaze on Friday night.

Speaking to vanguard, a source from the community said they were
aware of the recovered corpses even though the victims
are yet to be identified.
He also added that some of them might have drowned after
jumping into the river to save their lives in panic.

Also speaking on the condition of anonymity, a staff of Matrix,
confirmed the recovery of some bodies, saying: “People jumped into the water.
The corpses seen floating on the river have been taken to the mortuary.
Their identities are for now unknown.”

In its reaction to the incidence, the Nigeria Union of Petroleum and Natural Gas Workers, NUPENG,
in a statement given by the General secretary and President , Afolabi Olawale and Prince William
Akporeha said the union is greatly aggrieved by the saddening news of the explosion that erupted in the gas section of Matrix Energy Tank Farm,
which in turn resulted in loss of
lives and property on Friday, July 8,
2022, at lfiekporo in Warri, Delta State.

“We mourn with the families of those that died from this very
unfortunate accident”
the statement further read “We pray that the Almighty God grants
fortitude to the families of the deceased to bear
this unreversable loss.

“As a trade union and organisation,
we have no other option at this crucial time than to use
this very painful incident to further urge all employers of labour,
especially in the oil and gas industry to place greater premium on
safety in all workplaces and ensure proper and constant training for all personnel on
matters of health and safety.

“Industrial accidents should be prevented,
and this should be the highest priority.
We wish the injured quick recovery and the management of Matrix Energy
God’s guidance and support at this very trying time as well.”