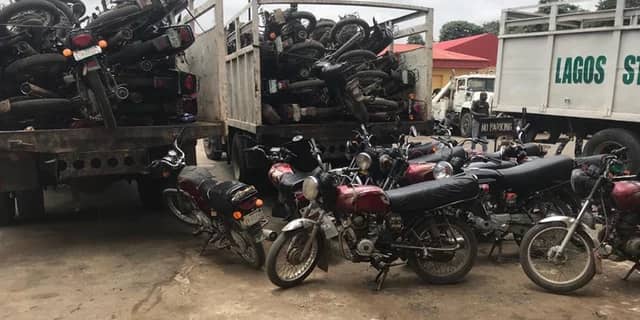 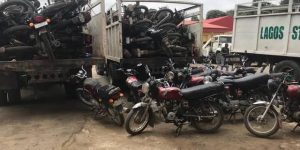 Following the recent ban placed on commercial motorcycles in Lagos State, it has been reported that the government have began crushing all motorcycles, popularly called Okada, which were seized in the state.
Shola Jejeloye, chairman of the Lagos taskforce in Alausa, Ikeja, told journalists that the ban has been existing and has been effective since February 2020.
In a statement on Thursday, He said that 2,228 motorcycles were seized and they will be crushed.
In May, Governor Sanwo-Olu imposed a fresh ban on all commercial motorcycles, (okada) stopping them from operating in six local government areas – Eti-Osa, Ikeja, Lagos Island, Lagos Mainland, Apapa, and Surulere.

According to Mr Jejeloye, the ban placed on commercial motorcycles since 1st February 2020, was never withdrawn. But it was barely noticeable because people believe in violating the law.
He also revealed that since 1st June, there has been more than 85% of compliance with the fresh ban, and the numbers of Okadas have drastically reduced, as they are not being seen on the express any longer.

Mr Jejeloye further noted that security operatives In the state, will maintain the enforcement of the ban and another phase, which will now apply to every road user, will start on Monday to analyze the level of compliance

“They (Okada riders) are watching us and I know that they might believe that the first week of the ban will be thorough and after one week we are going to relax,” Mr Jejeloye said.

“And you will not see any police officer, any paramilitary officer using his uniform to carry passengers. It has been a matter of principle,” he said.

“You are a police officer, you are a naval officer or you belong to the paramilitary. When you have to be on a bike you must be on uniform. You must be fully kitted, the law does not respect anybody.

“ So if this is the position of the law we must ourselves.”