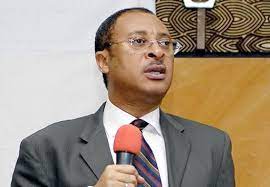 In the view of Pat Utomi, the Third Force is not necessarily going to be a political platform ahead of 2023 polls Utomi made this view known when speaking with journalists in Abuja on Thursday, September 23 There have been widespread rumours that the Rescue Nigeria Project (supposedly a variant of the Third Force) is a new party to be unveiled in October.

Professor Pat Utomi has dismissed claims that he, alongside other prominent Nigerians, are planning to announce the Rescue Nigeria Project (RNP) as a new political party on Friday, October 1. Speaking on the sidelines of a press conference announcing winners of the Year 2020 Zik Prize in Leadership Awards organised by the Public Policy Research & Analysis Centre (PPRAC), Utomi did not refer to the platform as a political party.

“The political economist explained that the movement is focused on getting competent leaders with no special regard to affiliations. “

“No, I don’t think it (Third Force) is going to be a political party. We need to gather some of these movements, moving towards a better society.”

Third force: Jega, Pat Utomi, Duke, reportedly create new political party ahead of 2023 Meanwhile, it was claimed that ahead of the 2023 general elections, some prominent Nigerians had established RNP. The founders of RNP reportedly said they launched the political platform to give Nigerians an alternative to the ruling All Progressives Congress, and the main opposition Peoples Democratic Party.

In an interview, Oshun said the people prospecting for Third Force are not different from the people in the two main political parties

On Thursday, September 23, the Honourable Minister for Youth and Sports Development, Mr Sunday Dare, will deliver a keynote address at the 76th United Nations General Assembly (UNGA) High-Level Side Event on Social Business, Youth and Technology

The address, which will be delivered virtually, will focus on “Social Business Towards a Sustainable Revival of Post-Covid 19 Economy.” The Minister is expected to draw on his extensive wealth of experience in engaging with young business owners, investors, entrepreneurs and innovators across the African continent and beyond. This is the second time in two years that Mr Dare has been asked to speak at this particular high-level event.

In his keynote address at the 74th UNGA, he said the Youth in Africa’s biggest nation, Nigeria, are in a position to help solve major challenges of the world. He added that Nigeria will rely increasingly on its Youth population to develop smart products and solutions to conquer the challenges and problems of climate change, economic slowdown, unemployment and poverty.