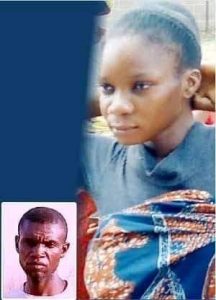 The picture below is that of Pati. She lives in Rukubi in Doma local government area of Nassarawa state. She was impregnated by one Thomas Abakwe, a hunter a who reportedly committed suicide in Gbuko village in 2014. He was married to one Esther who confirmed her husband was buried in 2014.

Esther relocated from Gbuko to Rukubi after the death of her husband. At Rukubi, she met and fell inn love with one Audu Genger.

Drama started when Audu Genger’s niece, Pati became pregnant and they asked her who was responsible? She mentioned Thomas. The family asked her to bring him home.

They agreed to meet on November 6 and to the surprise and chagrin of Esther, the man that impregnated her became Thomas Abakwe her husband who died and was buried as a result of committing suicide years ago.

According to her, on seeing him, she asked him what he was doing there after he had died and was long buried . She said while she was still talking, Thomas Abakwe disappeared as it happens in Nigerian movies.

Corroborating Esther’s claim, Pati who confirmed her boyfriend’s disappearance said they met in 2020 at a provision shop and he told her he was a businessman from Abuja based in Lafia.

Within two weeks, the SS Three student said nights together from one hotel to another in Lafia at nights. He had a small car he was driving and he spoilt her with money and gifts. Four months after their meeting, she became pregnant and her disappointed parents asked her to bring the man who impregnated her home_ Alas!!! He came and disappeared when he saw his wife who’s already pregnant for her new love Audu Genger.

Read Also: Police arrest an Engineer For having Binance app