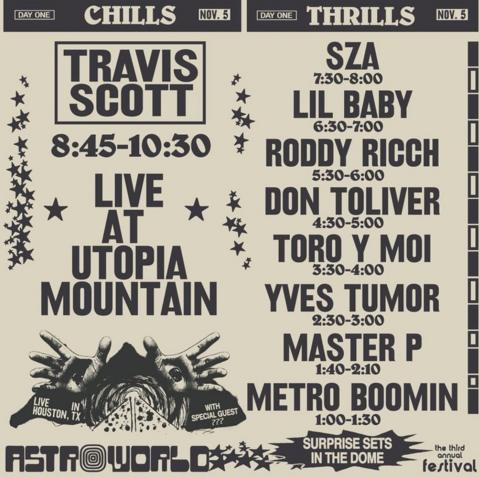 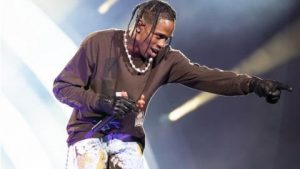 For almost 40 minutes after Houston police and firefighters responded to a “mass casualty” event at Travis Scott’s packed Astroworld music festival on Friday, the superstar continued to perform.

By the time he left the stage, it had become one of the deadliest concerts in US history. Eight people died and dozens more were injured.

Fans were filmed chanting “stop the show” and pleading for staff to help. One even climbed onto a camera platform to point out the injured.

Scott eventually ended his set about 15 to 20 minutes ahead of the advertised time. But questions remain about why it didn’t finish sooner.

Scott, one of the biggest names in rap music, launched the event in 2018. He said in an Instagram video that he was not aware how bad things were during his headline set this year.

“Any time I could make out anything that’s going on, I just stopped the show and helped them get the help they need,” he said. “I could just never imagine the severity of the situation.”

In footage from the concert, he can be seen interrupting his performance to ask for help for a fan who had passed out.

However in another another video, he can be heard saying during another break: “Who asked you to stop? Y’all know what y’all came to do – chase me, let’s go.”

The rapper is known for his wild shows, and has been in trouble for inciting dangerous behaviour in the past.

In 2015, he was charged with disorderly conduct after encouraging fans in Chicago to ignore security and rush the stage.

Two years later, he spotted a fan hanging from a venue’s second-storey balcony and tried to persuade them to jump. At the same concert, a 27-year-old fan was paralysed after being pushed off a third-floor balcony.

In 2019, hundreds of fans rushed the Astroworld barriers, with three people going to hospital with minor injuries. Police wrote on Twitter that the event was understaffed and that “promoters did not plan sufficiently for the large crowds”, although the statement was later deleted. 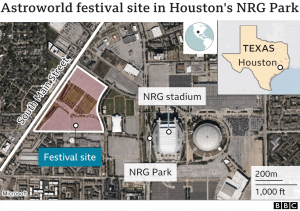 Fears about crowd safety had been raised before this year’s event. A security plan obtained by the New York Times addressed several areas of concern.

“Based on the site’s layout and numerous past experiences, the potential for multiple alcohol/drug related incidents, possible evacuation needs, and the ever-present threat of a mass casualty situation are identified as key concerns,” the document read.

The city’s police chief also visited the star in his dressing room to convey concerns about the energy in the crowd.

In a statement, Chief Finner said the “brief and respectful meeting” allowed him to “share my public safety concerns” and ask the star “to be mindful of his team’s social media messaging on any unscheduled events.

So how could this tragedy happen?

Investigators will look at a number of factors, says Simon Ancliffe, founder of Movement Strategies, which advises major UK the NRG park where Astroworld was held

Some experts have also suggested Scott’s decision to play on a separate stage with no other acts scheduled at the same time could have exacerbated the situation.

That goes against a common practice in crowd management, known as “spreading the field”, where organisers arrange several competing headliners or stagger stage times to control the flow of fan

But Scott’s performance came 45 minutes after SZA had ended the day’s final set on Astroworld’s second stage. Fans who had been gathering near the barriers of his $5m “Utopia Mountain” arena since lunchtime were suddenly met with an influx of revellers, hyped up by a massive countdown clock heralding the star’s arriva

“The crux of the problem likely happened as the clock got close to zero,” one unnamed source told Variety magazin

One teenage fan said she got into difficulties almost immediatel

“Once Travis Scott came on, I told myself this is the moment I’ve been preparing for, I just need to breathe,” Diana Amira told NBC news. “But… my ribcage was so squished that I couldn’t expand my lungs to catch a breath

Thankfully, crowd-related deaths at music events are relatively few and far between

“The first thing to say is that if you have an experienced crowd team on site, it won’t reach that stage,” Eric Stuart tells BBC Radio 5 Liv

“If the worst comes to worst, there’s a small group of people who have what we call the ‘red card’, and it is literally a message to the stage manager that we need to cut the music, we need to sto

“And then we need to engage the artist for him or her to speak to the crowd. Ideally, we don’t want a guy or girl in the high-vis jacket or the police coming on stage and talking to the crowd. The artist is the best person to do that

That seems to have happened during Friday’s concert. The question for investigators will be why the music continued after the initial call for hel

In his video statement, Scott said he was “working closely with everyone to get to the bottom of this” and described himself as “honestly just devastated

Will lessons be learned

Steve Adelman, vice president and lead counsel for the Event Safety Alliance, urged against apportioning blame at this stage

“There is the instinct to rush to judgment before we know what actually happened,” he told Rolling Stone magazin

But Prof Still adds: “If you look at any other safety-related industry – aviation, for example – if there’s a near miss or a close call there’s an investigation by experts, and new procedures are put into place to prevent that happening agai

“Unfortunately, in the events industry, it comes down to litigation and it’s generally settled out of court. I know, because I’m an expert witness in a number of international case

“The court documents get sealed, the information never gets fed back into the industry and so there’s no learning, there’s no improvement