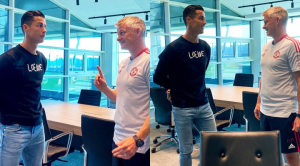 Cristiano Ronaldo has appeared at Carrington’s training base for the first time, since arrived at Manchester United since end of last week.

The club official social media account shared a shot clip of the 36-year-old evergreen attacker, who has made returned to Old Trafford 12 years after leaving, in the club’s black training gear with red trim.

The five-time Balloon d’Or winner, who has 30 major titles for club and country, is joined by Juan Mata as they make their way to the pitch.

The Portuguese forward’s return was announced last month, having won honours at Real Madrid and Juventus.

While his last fixture for his country saw Ronaldo become the highest-scoring international player of all time, overtaking Iran’s Ali Daei with 111 goals.

The evergreen attacker was pictured earlier today in Ole Gunnar Solskjaer’s office, speaking with his former team-mate and now manager.